This gate garden at the La Jollan Townhomes contained one palm, one electrical box, and one large desultory Dietes which didn't bloom. Here's the new garden, full of the promise of color, but quite diminutive due to materials budget contraints. Cute! Good luck, little plants. You'll have to deal with wind, road dirt, heat and cold by turns, and precious little attention. Oops! Looks like the irrigation doesn't work either! 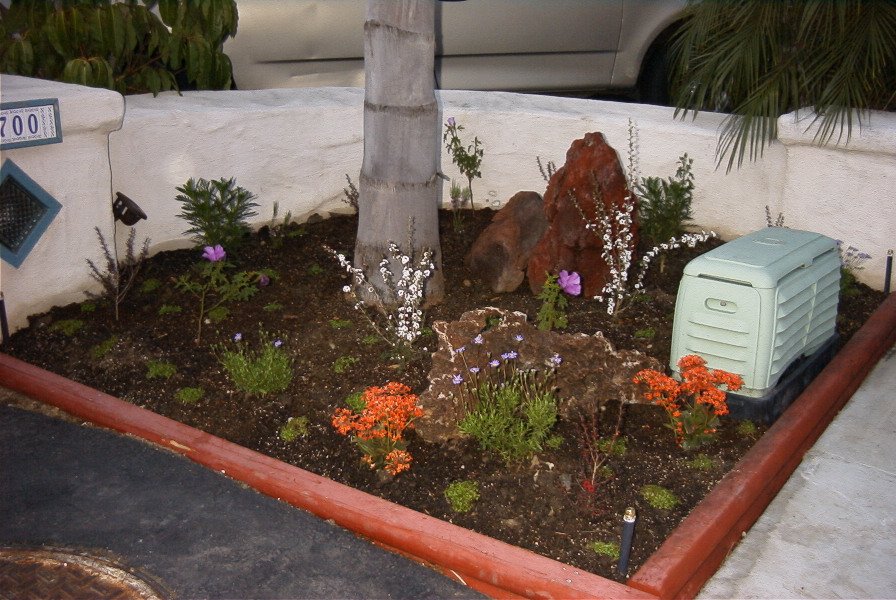 Exactly one year and approximately 10 (ten) gallons of water later (again, due to severe budget constraints), our florid friends frighten the neighbors as they greet traffic on Torrey Pines Road. Note how the plant with the purple flowers, just a stick one year ago, dwarfs the postal truck. Now where did that hideous electrical box go? 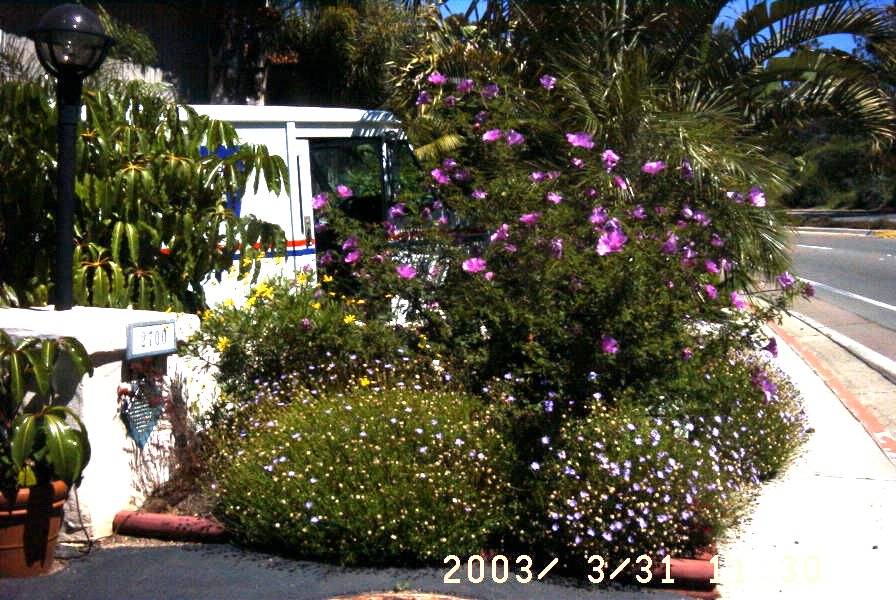 The "amphitheatre". We're not talking about a makeover; this slope calls for some serious terraforming. We had our first consultation in January. I called to arrange the follow-up. A small voice came through the phone: "So, is there hope for my yard?" I say 'yes', but proceed to have disturbing dreams before beginning work on this dry 45-60-degree slope. The hill is formidable, the budget small, and the disappointment from the expensive and unsuccessful landscape contractor makes the owner understandably suspicious of all persons horticultural. We decide on a weekly expert care and gradual development plan to guide the evolution of a living eco-system out of the dust. 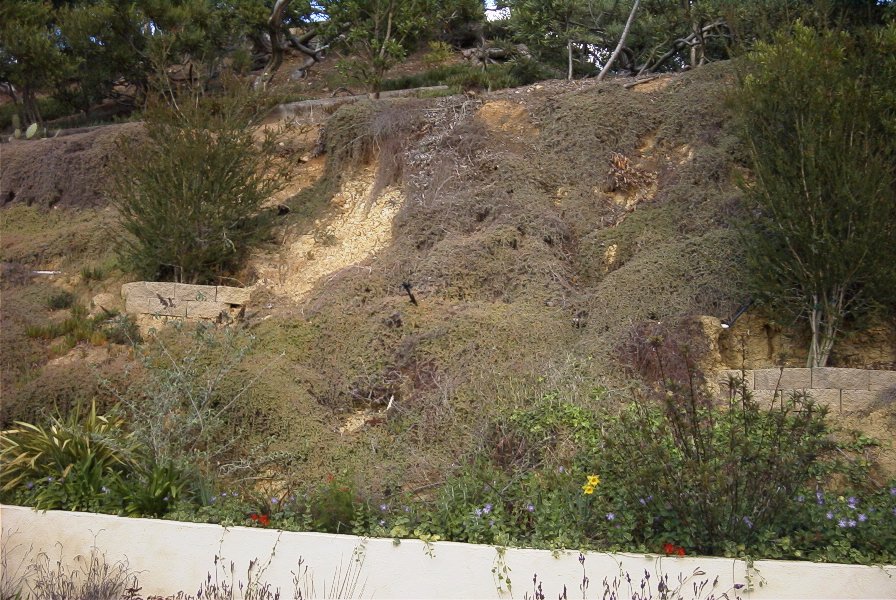 March, one year later. The owner says, "I can't believe the transformation. Last year it would have been unthinkable." 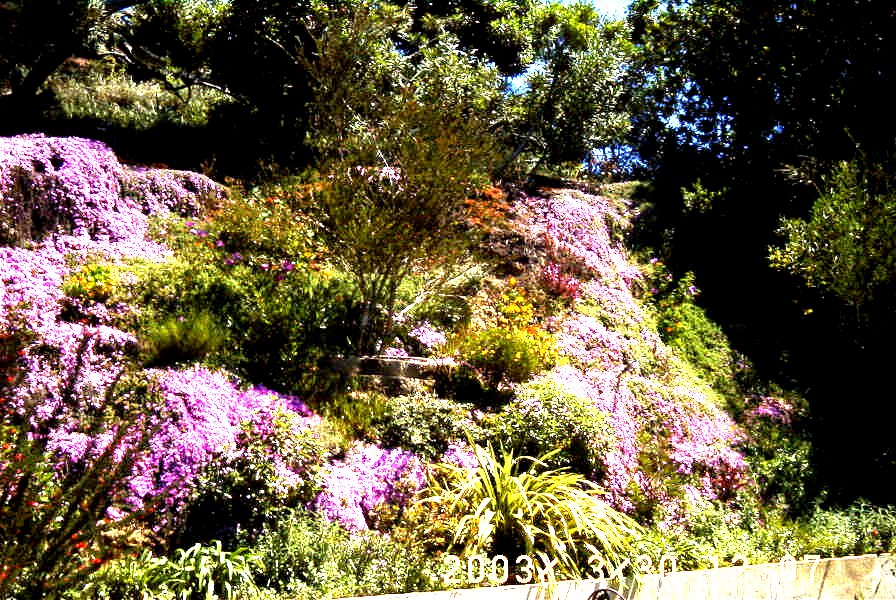 Poor St. Francis! He has to stand out on the naked dry cliff with out the company of his floral brethren! The owner of this property said that he'd never been able to get anything to grow out there. When I dig into it, I find that the earth is like baby powder or ash! Unlike the rest of this hill, the spot is in full sun. Just my kind of challenge. 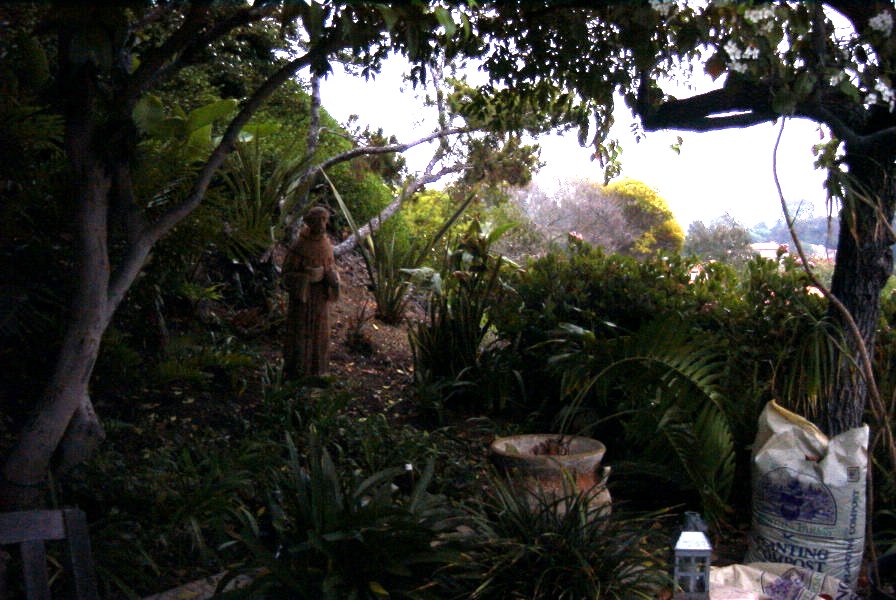 Horray! Flowers to the rescue! These lovely drought-tolerant plants are tough as nails and ready to help hold up the powdery Mt. Soledad cliff. 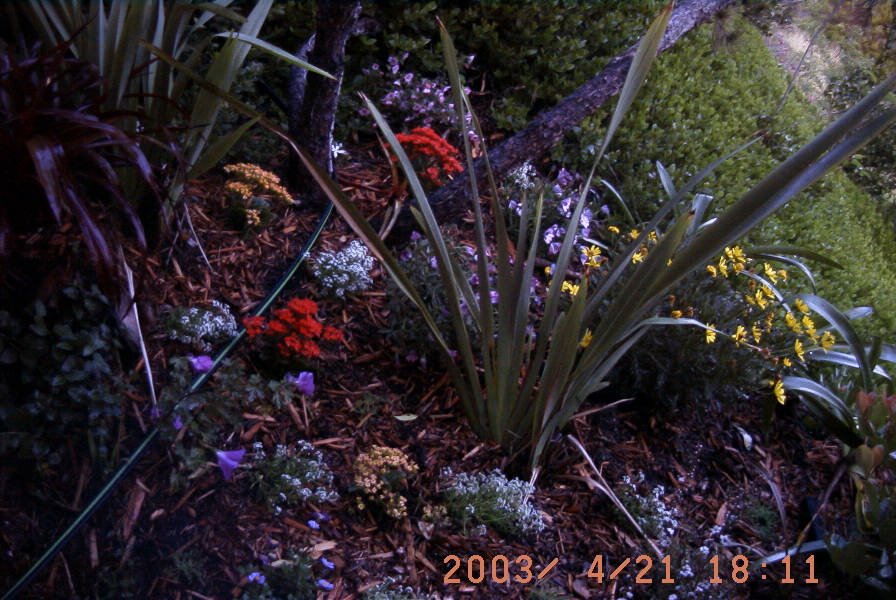 Mary, too, is bereft of color. Due to the diligence of a day-laborer with a leaf blower, there's not even enough soil or detritus to hold up an Impatiens, and too much shade even if there were. Dried and salt-damaged ferns hold onto this 60-degree slope for dear life. 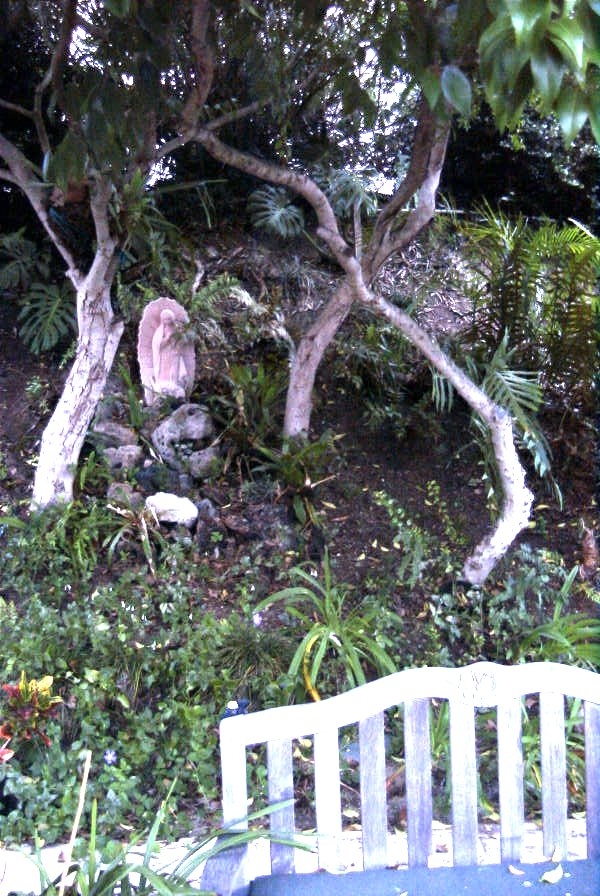 Ah, the magic of styling! A few hand-tossed bags of compost and shredded cedar later, there's enough soil depth to plant Brunfelsia, Azalea, Cyclamen, Calla Lilies, and, of course, the obligatory and obedient Impatiens. Selective (i.e., non-day-laborer) pruning of the branches overhead preserve the woodland beauty while letting in some much-needed light. 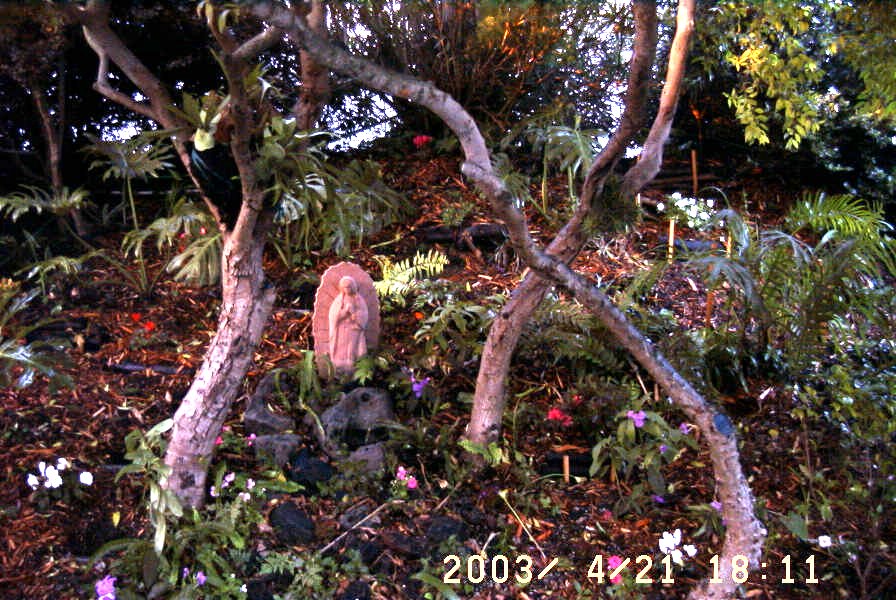 The property extends to the black chainlink fence, beyond which is the driveway and the neighbor's wood fence. Notice the carefully sheared ball, dead center, consisting of a tea tree, a hibiscus tree, a rhapheolepsis bush, a lantana bush, ivy, a pittosporum, and an asparagus fern, and possibly some other unidentified objects. Also notice the relentlessly-raked dry dirt. During the two years that the house was under remodel, the gardener absolutely refused to pick up a hose (how dare the owner ask the gardener to water! ), but there was plenty of rake-and-shear-and-blow action. 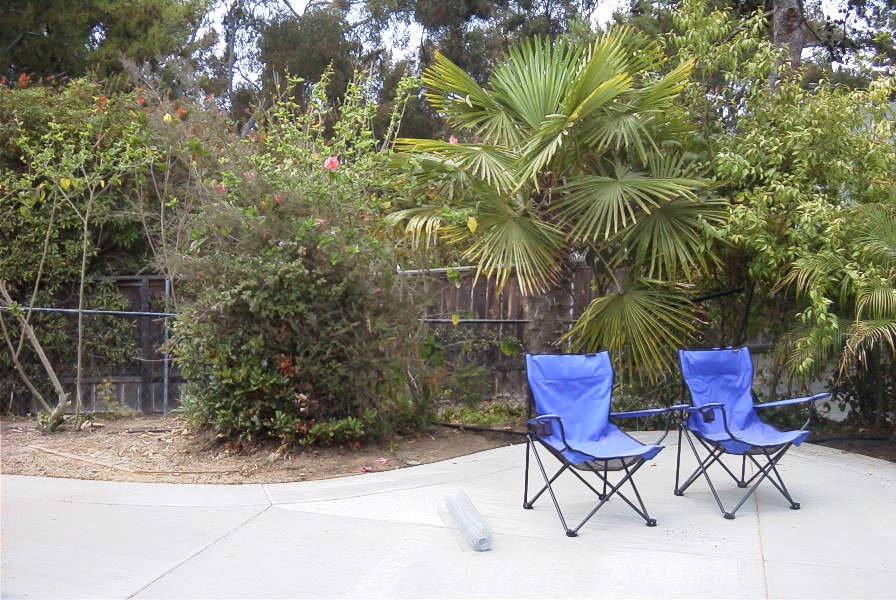 Here, the poor tea tree and hibiscus tree have been liberated and propped up with string, and the other stuff was tossed. The new plants have also been installed and repair pruning has been done. 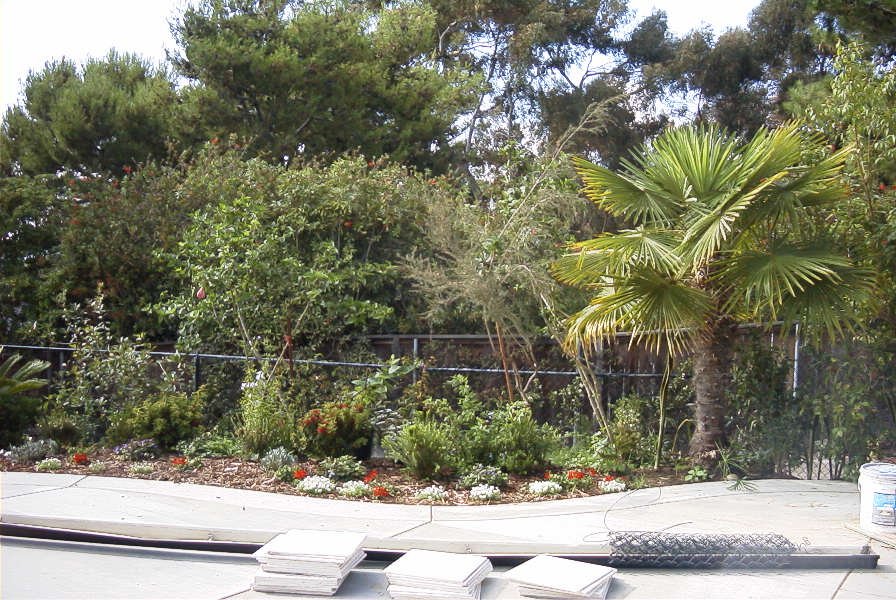 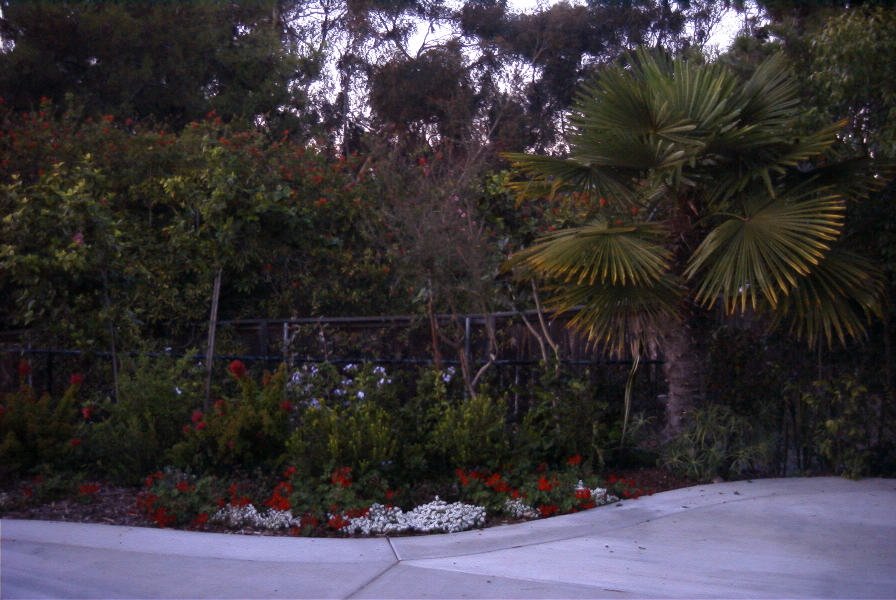