Area Residents Mutilated in Front of Own Home 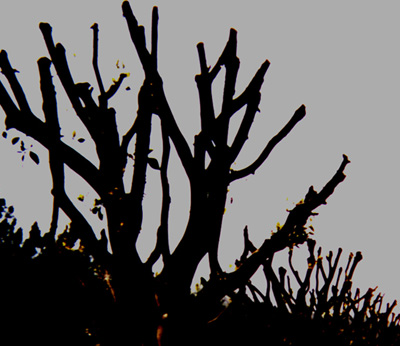 Neighbor claims they didn't have an enemy in the world

La Jolla. Six La Jolla residents were severely wounded and left to struggle for life in the 2700 block of Torrey Pines Road, sources say. Authorities are still investigating, but police admit that serial day-laborers are involved.

This type of mutilation is common enough to have its own name. 'Heading back' is the term used by the landscaping underworld and adopted by criminal investigators. While pruning is a part of a normal, healthy relationship between tree and landscaper, head ing back is a twisted perversion of that natural activity. Heading back is commonly engaged in for the purpose of molding a tree into an unnatural form, such as a globe. The result is usually a heavy abundance of weak growth at the site of the mid-branch cuts, and is generally detrimental to the tree.

But in this case, the goal does not seem to have been an eccentric esthetic vision, but cold-hearted abuse. La Jolla accredited plantsman Carolyn Ray said, "I spotted the trees when I was running, and they stopped me dead in my tracks. At first, I though t that the branches had been removed to make it easier to chop the trees down. But here they still are, 3 months later." 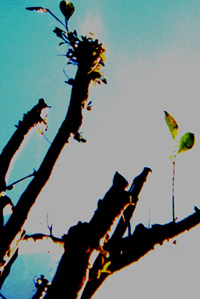 "This is definitely the worst case we've seen this year," says special investigator Charles Straith. "But there are definitely signature signs similar to other mutilations." Straith said that the multiple, jagged cuts, sometimes as many as 5 or 6 on one branch, remind him of several undisclosed cases that have not yet been resolved. Also reminiscent of those case s is the location of the cuts, and the tattered bits of stripped bark left behind. "You can tell by the way the cut was stopped in the middle, then continued, and the way the cuts are real close to the joints, that the perpetrator was very worked up, but deliberate."

Each of the victims received the same abuse. Judging by the immobility of the plants, said tree surgeon Bertha Romaine, they were forced to "watch as their friends were hacked at." Residents inside a nearby nursing home "saw the whole thing," but were un able to get to a phone to call for help, according to one convalescing woman. "It was horrible and senseless. We just had to sit there and watch."

Romaine has been frustrated for months in her pleas with the family to help repair the damage, which occurred sometime in February. "The poor things are in shock. They've got a few leaves, but those were on the trees when they were attacked. They're just not growing." Straith added, "The fact that they took off almost every single leaf and just left these few dangling...whoever did this is one sick individual."

"It doesn't make any sense. They didn't have an enemy in the world," said a local woman whose father resides in the nursing home. Allegedly everybody liked the trees, and the nursing home residents enjoyed the greenery. "All they see now is the road," sh e said.

Said one anonymous man, who claims to be an immigrant from South Dakota, "Frankly, I don't see what all the fuss is about. At least those untidy green leaves are all gone. I feel a little less homesick now." He added, "If you want my opinion, those trees were asking for it--looking that lush on a public street." 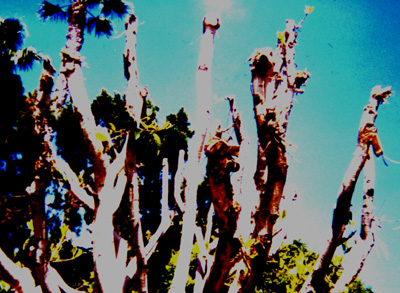